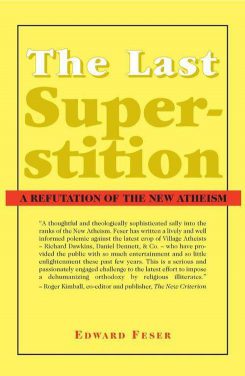 Chapter 5: Back to Plato’s cave

This last section of Chapter 5 is basically a long jeremiad against everything and everyone Feser doesn’t like, with paranoid rants about the motivations of those who prefer post-Thomistic philosophies:

More precisely, their desire to re-orient human life toward this world and reduce the influence of religion led the early modern thinkers to abandon traditional philosophical categories and to redefine scientific method so that reason could no longer provide religion with the support it had always been understood to give it, at least not in any robust way. [p. 221]

Traditionally, sodomy has been classified together with murder, oppression of the poor, and defrauding a laborer of his wages as one of the four sins that “cry out to heaven for vengeance.” [p. 223]

The word “traditionally” is an appeal to antiquity, the idea that an idea is good because it it old. In 1860 in the US, one could have defended slavery on the grounds that it has always been practiced.

Feser ends the chapter with an appeal to common sense (boldface added):

When we get clear on the general metaphysical structure of reality – the distinction between actuality and potentiality, form and matter, final causality, and so forth (all of which are mere articulations or refinements of common sense, and thus on all fours with the ordinary man’s belief in what his senses tell him) – we see that the existence of God, the immateriality and immortality of the soul, and the natural law conception of morality all follow. [p. 228]

Again, if there’s one thing we should have learned from the past few centuries of scientific endavor, it’s that what common sense and our senses tell us is often wrong: the earth orbits the sun. The tiny speck Betelgeuse is many times larger than our entire world; over 90% of all the matter in the universe is invisible and barely deigns to interact with us; heavy objects do not fall faster than light ones; objects in motion don’t just stop on their own; light beams sometimes behave like waves, and sometimes like ball bearings; two events aren’t simultaneous or non-simultaneous in an absolute sense.

If your metaphysics contradict physics, rather than explaining it, I’m pretty sure you’ve got a problem.